Travelling the World Solo Just One Step at a Time

I am a lover of wine and the Niagara Region has a plethora of world-class vineyards, making it known as Ontario’s Wine Country.  It is a wine lover’s dream come true.

History of Harvesting in the Niagara Region

The very first vineyards in the Niagara Region were planted in the early 1900’s. This wine region has continued to grow and now boasts being the largest grape growing region in Canada. Ontario’s Wine Country produces 80% of the grapes in Ontario and now has over 100 vineyards scattered throughout the Niagara Region.

Because of the unique weather conditions in the Niagara Region, there are various harvest seasons, which all depend on the type of grapes being harvested:

Mid-August for french hybrids such as Baco Noir

Mid-September through October for vinifera such as Pinot Noir, Chardonnay, Reisling and Cabernet Franc

Mid-December and beginning of January for icewine

Many wine lovers are familiar with the making of wine, but  fewer are familiar with icewine, a sweet wine typically served with dessert. Icewine  can only be produced in certain climates, and Wine Country offers the perfect climate needed.

The cold winter temperatures in Canada provides the ideal location to produce icewine.  This makes Canada one of the largest icewine producers in the world, with the Niagara Region being the key contributor. The first batch of icewine was produced  quite recently in the Niagara Region in 1984.

Canada is the producer of 75% of the worlds icewine, with the majority of that wine being produced in Ontario.

Harvesting the grapes to make icewine is an entirely different and risky process. The grapes are left to harvest and ripen throughout the summer months. They are then left to freeze during a portion of the winter at temperatures of -8 degrees Celsius or lower.  They are eventually harvested in mid-December to January, depending on what the weather conditions have been like throughout the early winter months.

While the grapes must be harvested when they are frozen, it is imperative that they have not been damaged by frost. Because of this, a mass number of grape pickers are needed  to harvest the grapes at a very specific time, failing which there is a risk of the grapes being lost.

Pro Tip:  The Niagara Region is host to several icewine festivals in January of every year.

Tours and Tastings for the Wine Lover

No visit to the Niagara Region is complete for a wine lover without a tasting or two.

The Niagara Region boasts over 100 vineyards, most of which offer tastings and/or tours.  Some also have a full restaurant on site.  There certainly isn’t a shortage of wineries  to choose from and you won’t have to search far to find one.  Get a list of all the wineries here.

Jackson Triggs has always been one of my favourite wineries to visit.  It is a mid-sized winery, it is clean and it is modern….and the wine is pretty awesome as well, which is an added bonus!

This 11.5 acre vineyard was established in 1993 by Allan Jackson and Don Triggs, which makes this vineyard fairly new.

It features three primary varieties of wine, Chardonnay, Pinot Noir and Riesling. The growers of Jackson Triggs work with other growers to augment a supply of Merlot, Cabernet Franc, Sauvignon Blanc and Cabernet Sauvignon, and has become Canada’s most award winning vineyard.   The wines from Jackson Triggs can be purchased in the liquor stores in Ontario at a reasonable price.

Jackson Triggs operates tours year-round, rain or shine, which highlights how the wines are crafted from the vineyard to the barrel.

In addition to the tours, wine tastings are offered, together with pairings of fine cheeses.  I have many a time spent hours with a glass of wine (or two) and cheese and crackers, taking in the sounds, sights and smells of the vineyard, with on the rare occasion, the sound of live music in the background.  This is the perfect way to spend a summer or fall afternoon.

The vineyard will often host various events, specifically, the Niagara Summer Concert Series and the Niagara Savour the Sights.

If a tour is on the agenda, which I highly recommend, set aside at least an hour as you learn about the art of wine-making from the vineyard to the wine cellar, while tasting four wines throughout the tour (white, red, sparkling and icewine).  Obtain more information on Jackson Triggs, its events and wine tours here.

Barrels of Wine on the Wine Tour 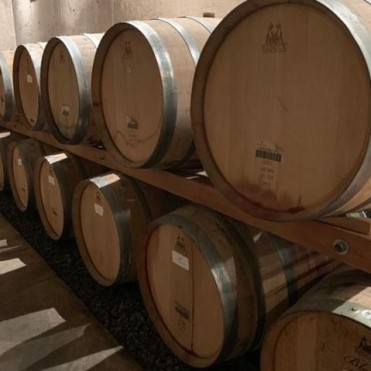 Whether you explore the vast vineyards at Jackson Triggs, or a different winery while visiting the Niagara Region, you won’t be disappointed…..the Niagara Region truly is a wine lover’s dream!

While you are in the Niagara Region, you might also want to explore Canada’s honeymoon capital, Niagara Falls.

Hi! I'm Kelly, the face behind Just One Passport. I have long been an adventurous travel addict, who began travelling solo in 2010. Let me inspire you to escape your comfort zone and enter the world of solo travel, just one step at a time.